1790 The United States Naturalization Law of March 26, 1790 (1 Stat. 103) provides the first rules to be followed by the United States in the granting of national citizenship. This law limits naturalization to any immigrant who is a “free white person” of “good character” and thereby excludes Native Americans, indentured servants, slaves, free Blacks, and Asians.

1844 Oregon Provisional Government prohibits slavery and excludes Blacks and “Mulattoes” (an archaic term referring to people of mixed Black, White, or Native American ancestry) from living in Oregon and passes the infamous “Lash Law” requiring that Blacks “be they free or slave, be whipped twice a year until he or she shall quit the territory.” Deemed too harsh, its provisions for punishment were reduced to forced labor.

1844 Nathaniel Ford arrives in Oregon with a slave family—Robin and Polly Holmes and their children (prior to territorial status). He promises to free them after they help him establish his farm. When Ford refuses to free four of the Holmes’ children, Robin sues Ford. By the time of the suit, 1849, Oregon is a United States Territory and its citizenry had declared slavery unlawful. The Holmes children are granted freedom in 1853 in an Oregon Territorial Supreme Court case (Judge George H. Williams, presiding), Holmes v. Ford, reaffirming that slavery is illegal as outlined in the Organic Laws of Oregon.

1848 Three hundred activists gather in Seneca Falls, N.Y., to strategize how to achieve women’s suffrage nationwide. Participants sign the Declaration of Sentiments and Resolutions, modeled on the Declaration of Independence, calling for equal treatment of women and men under the law and voting rights for women. 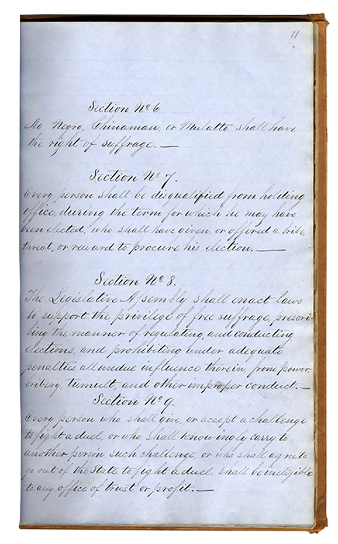 1850 The Oregon Donation Land Act becomes law, granting free land to “whites and half-breed Indians” in the Oregon Territory. Blacks, however, are prevented from claiming land in Oregon.

1857 Draft of the Oregon Constitution states in article II, section 6: “No Negro, Chinaman, or Mulatto shall have the right of suffrage.” As Oregonians debate statehood, there remains a strong interest in excluding Blacks from Oregon because of the expressed belief that slaves or freed slaves would compete with Whites for work.

1859 Oregon becomes the 33rd state and John Whiteaker is elected governor. On February 14, 1859, Oregon becomes the first state admitted to the Union with an exclusion law written into the state constitution. The new Oregon constitution denies women, Blacks, Chinese, and other people of color the right to vote, along with certain other rights (e.g., property ownership), thus setting the stage for a century-and-a-half struggle to achieve equality. Subsequent state statutes as well as the decisions and positions of agencies and organizations further restrict access to full citizenship and the ability to participate fully within the legal profession.

1862 The Oregon legislature adopts a law requiring all Blacks, Chinese, Hawaiians (Kanakas), and “Mulattoes” residing in Oregon to pay an annual tax of $5. If they cannot pay, the law empowers the state to press them into service maintaining state roads for 50 cents a day. Because most of these people cannot find employment—even as road builders—or, if they do, are paid very low wages, they generally are unable to pay the annual tax. The law effectively precludes people of color from participation in the legal and judicial professions.

1863 As a war measure during the Civil War, President Abraham Lincoln’s Emancipation Proclamation orders the freeing of slaves in the 10 states that were still in rebellion, thus freeing more than three-fourths of American slaves from bondage.

1868 The Fourteenth Amendment to the United States Constitution grants citizenship to people born within the United States and subject to its jurisdiction regardless of their parents’ race, citizenship, or place of birth, but excludes untaxed Native Americans (those living on reservations).

1870 The Fifteenth Amendment, granting Black men the right to vote, is added to the U.S. Constitution despite failing to pass in both Oregon and California. The federal law supersedes a clause in the Oregon State Constitution banning Black suffrage.

1875 The Pioneer Courthouse, home to the federal District Court of Oregon, opens its doors. Sixteen years later, the members of the newly formed Oregon Bar Association will hold their first annual meeting in the courtroom of U.S. District Judge Matthew Paul Deady, the state’s most prominent 19th-century jurist.

1876 Silas B. Smith, born 1839 and a founding member of the Oregon Historical Society, is the first Native American in Oregon admitted to practice law. Smith is the grandson of Clatsop Chief Coboway, who welcomed the Lewis and Clark expedition to the mouth of the Columbia River in 1805.

1878 American Bar Association is established. The legal profession in America is undergoing professionalization, with uniform training programs being created among law schools and formalization of bar examinations required to practice law. At its founding, the Association excludes lawyers of color from membership.

1883 An attempt to amend the Oregon Constitution to remove its ban on Black suffrage fails to pass, despite the fact that the clause in question was rendered moot following the passage of the Fifteenth Amendment to the U.S. Constitution in 1870. Further attempts to remove this language prohibiting Blacks from voting will be unsuccessful in 1895, 1916, and 1927. Many racist and discriminatory sections in the Oregon Constitution will not be changed until 2000, though they have been rendered moot by federal and state laws, courts, and constitutional amendments.

1883 Willamette University establishes its College of Law, thus becoming the second law school in the West and the first in the Northwest. The 1883-84 University catalog includes, for the first time, a full description of Willamette’s law school and a formalized law program. It runs four pages and describes a two-year course of study leading to a Bachelor of Laws. Tuition is $50 per year.

1884 Oregon Law School is founded in Portland as a two-year program with three classes per week.

1885 The state legislature passes and the governor signs Oregon Senate Bill 50 allowing women to practice law, a full 27 years before they will be granted the right to vote.

1887 The Dawes Act (also known as the General Allotment Act or the Dawes Severalty Act of 1887) is adopted by Congress in 1887, authorizing the President of the United States to survey Native American tribal land and divide it into allotments for individual Native Americans. Those who accept allotments and live separately from the tribe are to be granted United States citizenship. The stated objective of the Dawes Act is to stimulate assimilation of Native Americans into mainstream American society; individual ownership of land on the European-American model is seen as an essential step. The act also provides that the government will classify as “excess” any Indian reservation lands remaining after allotments, and sell those lands on the open market, allowing purchase and settlement by non-Native Americans.

1890 A group of prominent attorneys meets in Portland to create the Oregon Bar Association led by Cyrus A. Dolph, who becomes the first Bar president. The organization’s stated purposes are “to cultivate the science of jurisprudence, to promote reform in the law, to facilitate the administration of justice, to maintain the standard of integrity, honor and courtesy of the legal profession, and to cherish the spirit of brotherhood among the members thereof.” The Bar is founded at a time of great social unrest in America as the nation receives millions of immigrants from Europe and Asia, people of diverse ethnicities, cultures, and religions who influence the growing nation’s social, political, and economic affairs.

1898 Attorney Florence Olson (who later became Florence Ledding) is appointed the first female Referee in Bankruptcy in the U.S. District Court for Oregon. She subsequently donates her home to serve as the public library for Milwaukie, Oregon.