2000 Oregonians vote to remove all racist language from its constitution that, until then, still has a clause that reads: “No free Negro, or mulatto, not residing in this state at the time of the adoption of this constitution, shall come, reside, or be within this State, or hold any real estate.” Though this and other discriminatory language have been rendered unenforceable by federal laws and amendments to the U.S. Constitution, it is not until this election that several examples of institutional racism and oppression are finally removed from the Oregon Constitution. The effort is led by State Senator Avel Gordly, the first African American elected to the Oregon Senate.

2001 The Oregon State Bar convenes a “Convocation on Equality.” Dennis Archer, the first African-American president of the American Bar Association, is the keynote speaker, urging members of the bar to further efforts toward diversity, inclusiveness, equality, and justice. The Bar’s Diversity Section is soon created and diversity becomes even more strongly part of the OSB’s mission and values statements.

2003 Darleen Ortega becomes the first Latina and the first woman of color to join the Oregon Court of Appeals.

2003 The Oregon State Bar Board of Governors adopts the Diversity bylaw as part of a comprehensive revision of the Bar’s bylaws:

The Bar respects the diversity of its membership and its employees. Bar entities, including, but not limited to standing committees, section executive committees and Continuing Legal Education programs and publications, should reflect this diversity. “Reflect,” as used in this article, does not require the application of strict quotas, but requires a good faith attempt to achieve representative participation. Reports of such efforts may be required of bar entities. In addition, no bar entity may discriminate on the basis of race, religion, color, gender, sexual orientation, geographic location, age, handicap or disability, marital, parental or military status or other classification protected by law. No professional, business or social functions of the Bar, or any of its sections, committees, affiliates or other authorized entities may be held at any private or public facility, which discriminates, based upon the terms listed above. Furthermore, advertisements or solicitations for employment must offer equal employment opportunities. The United States Armed Forces are exempt from this policy as it regards advertisements in the bar’s communications.

2003 Marva Fabien, a native of Trinidad and Willamette College of Law’s first coordinator of professional development and multicultural affairs, becomes the first Black attorney member of the Oregon State Bar Board of Governors. She will be followed by Kellie Johnson in 2008.

2003 In Grutter v. Bollinger, 539 US 306 (2003), the United States Supreme Court upholds the affirmative action admissions policy of the University of Michigan Law School. The court rules that the school has a compelling interest in promoting diversity in the classroom.

2004 There are 675 minority members of the Oregon State Bar, amounting to 5.37 percent of the membership.

Later this year, by a 57 percent to 43 percent margin, Oregonians pass Ballot Measure 36, an initiative amending the Oregon Constitution to define marriage as a union of one man and one woman. In 2014 the amendment will be declared unconstitutional by U.S. District Court Judge Michael McShane, who rules that it violates the Equal Protection Clause of the Fourteenth Amendment to the United States Constitution.

2006 Portland attorney Adrienne Nelson becomes the second Black woman appointed as a judge in Oregon when Governor Kulongoski appoints her to the Multnomah County Circuit Court.

2006 The Oregon State Bar and the Oregon Judicial Department publish a Report on Access to State Courts for Persons with Disabilities. The report lists ways state courts and the Oregon State Bar can improve access, beyond minimum legal requirements, for court facilities, programs, and services, including: safety and security, jury duty, procedures, emergency evacuation plans, accommodation and grievance procedures, among other matters.

2006 The Oregon State Bar’s House of Delegates votes overwhelmingly to reauthorize the Bar’s Affirmative Action Program until 2021. The announcement is greeted with jubilation by more than 100 students, attorneys, and judges who have assembled at the House of Delegate’s annual meeting.

2007 Virginia Linder joins Justice Rives Kistler as the second openly LGBT member of the Oregon Supreme Court and is the first woman to become a justice by election. Justice Linder is also the first openly lesbian woman to sit on any state supreme court.

2007 John Haroldson is appointed by Governor Kulongoski as Oregon’s first Hispanic district attorney, serving Benton County. He is elected to the position in 2008.

2007 With her appointment to the Multnomah Circuit Court, Youlee Yim You becomes the first female Asian-American judge in Oregon.

2007 Mustafa T. Kasubhai becomes the first person of color to serve on the Lane County Circuit Court, and the first Muslim-American appointed to the bench in the state of Oregon, following his appointment by Governor Kulongoski.

2007 Valerie Love is appointed by Governor Kulongoski as the first Asian Pacific American female to serve on the Lane County bench.

2007 Clara Rigmaiden is appointed by Governor Kulongoski to serve as the first Latina on the Lane County bench.

2008 On January 1, 2008, the Oregon Equality Act becomes law, banning discrimination based on both sexual orientation and gender identity or expression in employment, housing, and public accommodations. The Oregon Family Fairness Act also goes into effect in this year, allowing same-sex couples to register as domestic partners and granting them the same spousal rights of married couples.

2008 Audrey T. Matsumonji is the first Asian American appointed as a public member of the Oregon State Bar Board of Governors.

2008 Barack Obama is the first person of color elected President of the United States.

2008 Diversity is prioritized as one of the American Bar Association’s (ABA) four goals. Goal III is adopted to Eliminate Bias and Enhance Diversity, replacing Goal IX (established in 1986 to Promote Full and Equal Participation in the Profession by Minorities and Women). The objectives of Goal III are (1) to promote full participation in the association, our profession, and the justice system by all persons and (2) to eliminate bias in the legal profession and the justice system.

2009 United States District Court Judge for the District of Oregon Ann Aiken becomes the first woman to be selected Chief Judge of that court.

2009 Román Hernández, one of few Hispanic partners in a major law firm (Schwabe, Williams and Wyatt), is elected president of the Hispanic National Bar Association.

2009 Eric Holder is appointed by President Barack Obama as the first African-American Attorney General of the United States.

2010 Governor John Kitzhaber appoints Liani Reeves as the first Asian American to be his general counsel.

2010 The Oregon State Bar holds its second Convocation on Equality in its ongoing efforts to infuse diversity and inclusion through the Oregon legal profession and the larger Oregon community.

2011 Mariann Hyland is appointed Director of the Oregon State Bar Affirmative Action Program, which is renamed the Diversity & Inclusion Department.

2011 State Circuit Court Judge Marco Hernández becomes the first Hispanic district judge on the United States District Court for the District of Oregon. He is also one of the few individuals nominated to the federal bench by presidents from different parties.

2012 The Oregon State Bar creates a Diversity Advisory Council to develop a Diversity Action Plan, a three-year plan to promote a systemic, collaborative, and strategic approach to achieving goals and objectives to enhance the Board of Governor’s interest in advancing diversity and inclusion.

2012 The Oregon State Bar’s Affirmative Action Committee is renamed the Advisory Committee on Diversity and Inclusion in recognition of its broader focus of supporting the mission of the Oregon State Bar by promoting respect for the rule of law, improving the quality of legal services, and increasing access to justice. The renamed Diversity and Inclusion Department, directed by Mariann Hyland, works to increase the diversity of the Oregon bench and bar by administering programs that reflect the diversity of the people of Oregon, educating attorneys about the cultural richness and diversity of the clients they serve, and removing barriers to justice.

2012 Following a distinguished career as an attorney, state judge, and board member of both the Oregon and American bar associations, Ellen F. Rosenblum becomes Oregon’s first female attorney general.

2013 The Oregon State Bar’s House of Delegates passes a resolution increasing the annual diversity and inclusion assessment for the first time in 23 years.

2013 In calculating diversity by longevity-of-membership, the Oregon State Bar counts more than a dozen members who passed the bar exam in or prior to 1950, providing Oregonians with legal experience spanning 70 years of practice.

2013 Michael McShane becomes the first openly LGBT judge on the United States District Court for the District of Oregon.

2013 Patrick Dennis, a student at Lewis & Clark Law School suffering from severe rheumatoid arthritis, is elected president of the National Association of Law Students with Disabilities. “[Law] schools can’t take a one-size-fits-all approach,” he explains. “The difficulty with disabilities is that it’s not easy just to pin it down. Everybody’s disabilities impact them in very individual ways.”

2013 Simon Whang is the first Asian American elected to the Oregon State Bar Board of Governors.

2014 U.S. District Court Judge Michael McShane overturns Oregon’s same-sex marriage ban, ordering the State of Oregon not to enforce its ban and stating that it unconstitutionally discriminates against same-sex couples. State officials earlier refused to defend the constitutional ban in court. In his opinion, Judge McShane writes: “I believe that if we can look for a moment past gender and sexuality, we can see in these plaintiffs nothing more or less than our own families. Families who we would expect our Constitution to protect, if not exalt, in equal measure. With discernment we see not shadows lurking in closets or the stereotypes of what was once believed; rather, we see families committed to the common purpose of love, devotion, and service to the greater community.”

2014 There are 1,023 minority members of the Oregon State Bar, amounting to 6.86 percent of the membership.

2014 Under the leadership of President Mike Haglund and Executive Director Sylvia Stevens, the Oregon State Bar Board of Governors adopts its 2014-2016 Diversity Action Plan. The Plan enumerates eight goals for strengthening the Bar’s diversity standards:

“With this action plan,” writes Oregon State Bar 2013 President-Elect Tom Kranovich, “the OSB takes its commitment to diversity front and center, and also weaves it throughout the various programs and services of the bar. It is evidence of our growth as an organization. Where we once had a stand-alone Affirmative Action Program we now have a comprehensive plan to make Diversity & Inclusion a part of every program and service we provide.” 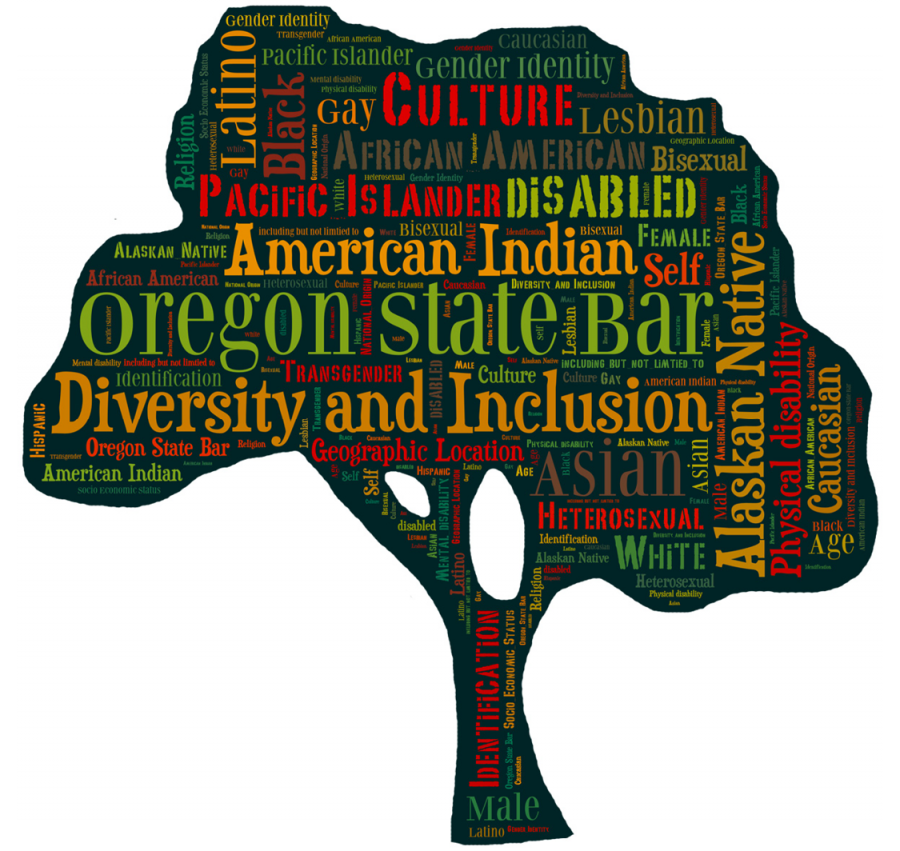